I’ve not done a newsletter this year. The reason being that there is so much to say, so much has changed, but also that life is not standing still. I could have written about my volunteering work at Gwrych Castle but just as I was about to write things changed. Not majorly but just a little slip and change. I could tell you about my writing workshop business and what is going on there but then something does a little change. With the Barefoot At The Kitchen Table things I would have said that I was giving up doing overly writing for well-being and only doing creative writing workshops at Gwrych and the Memoir ones. But then I got an email from someone in the health service asking if I’d do some well-being with her clients, which was swiftly followed  by a text from someone saying her friend would like me to do some well-being writing with some homeless people works with. I could tell you how I’ve worked out the pattern of Airbnb hosting in this area but then for the second half of the year we have had one room booked out by the same person for over 4 months, the other room for over two and now have someone staying longer term. There is no pattern!

I could tell you how my children will be here for Christmas and what they are doing. You

know I even ordered a turkey just before the end of November. But then my daughter says she’s off to New York with her boyfriend to have Christmas with her boyfriend’s family, and my son, who’s halfway through his basic training for the army says that even though he’s got a fortnight’s leave that this year they’ll spend Christmas with his fiancee’s family in Cornwall. Oh yes son got engaged in the spring!

I could tell you of the places we’ve been which have been good but then I realise that we’ve only had one week’s holiday in the whole year together. We’ve both had time off separately and been away for prayer support, seeing family, etc. But even then just when I thought of writing I would have had to squeeze in another place because we went to a wedding at the beginning of December.

I could list so many things that really you don’t want to here and so this Christmas/New Year I’ve decided not to send out a newsletter. My hope is that those who want to know what we’ve been doing will have kept in touch and if not will now use this as a time to say Hi. I love knowing what others are doing but most of those I care about I message – email, letter, phone, text – often, or follow on Facebook or Instagram. So my Advent vow has been to keep things simple, keep things relevant, and keep in touch more regularly.

… Or is university good for parents?

I’ve got two children. My eldest went off working on outdoor activity camps and travelling about 4-5 years ago. We get confused as to when it happened because he just sort of applied and went. Apart from occasional coming back for a month or two, or to get some stuff out of storage, or very occasionally to borrow money, we really only see him when he comes for a holiday with us, a week at the most. He has left home. My youngest has gone to university which means she went with lots of preparation, a bit of a fanfare, a set date for going, a car full of stuff, keeps running out of money as her course is quite demanding and she struggles to find work that fits around it, and then she comes home for 4 months over the summer. She has not left home yet. But she is in her early twenties, two years older than when her brother left home.

So what I get though is that come mid Sept she flies off and we don’t really see her till Christmas. We get use to empty

house, struggle a bit to begin with but use to it and like it after a while. Then she comes back for 2 weeks at Christmas. This is because her friends do the same. So all the time there is this ebb and flow of her not being part of our lives and then her being very much part of our lives. She’s also the child who likes to be downstairs not shut in her room. I think that’s why we never noticed her brother go, because he had been ensconced in his room for months beforehand only appearing to be fed.

But what this does, this ebb and flow, this empty nest but not quite, is that we, her and I, can forget that she is a young adult and can behave/get treated like a child.

We had an incident recently where I treated her like a child and actually she behaved like one. We were both out of order but it came about because we aren’t sure where the boundaries lie. I’m sure all us who’ve left home know that when we get back to our parent’s we behave like children again. I often laugh at my husband and the child-like voice he puts on when he’s on the phone to his 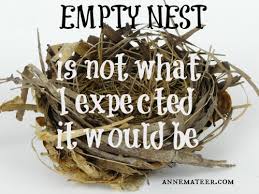 mum. I’m sure I do similar. But most of us have our own homes. In fact the only time my son and I really fell out recently was when he was in between homes and not sure what he was going to do with his life. Thankfully it didn’t last long, but both of us reverted to teenage years; him as stroppy teenager, me as bossy parent.

So how do we deal with this? And it could be worse. I know of friend’s children who have come home after university to re-nest. Even though the parents complain I can see the old patterns emerging, and know that when those children finally fly the nest that the pangs of empty nest will not be any easier, even when there is that sigh of relief too.

So is this constant ebb and flow and lack of money good for anyone? Yes we may have a lot more people with more qualifications but at what cost? At the cost of maturity? At the cost of emotional strength? To think of Nelson commanding

men at 15, William Pitt in parliament at a similar age, and other great leaders of over a hundred years ago, who were able to leave home and cleave to their destiny. I’m not saying my son is more sorted on his destiny than my daughter but I am saying that her coming and going, flying but not quite, causes emotional stress for both of us.