house that goes via the castle which I can see from my window, over the North Wales Expressway, then on to the beach and back via the park. It is a lovely walk taking in all sorts of terrain and today the tide was out so we got sand too. What struck me though as I walked was how much mankind has altered the terrain, tamed it, organised it.

First of all I was thinking of the two roads I have to cross – one, the old A road that is still well used. This runs along an older carter’s route. Modern man has just tarmacked it. This has then been replaced by the dual carriageway, much faster and straighter A55 where traffic goes along at a steady 60-70 miles per hour. These two routes make it clear how

man has used the landscape for his own means. These routes have to run where they do because it is near the coastline and so flatter.

Then there is the castle, built in the nineteenth century and looks like a fairy castle. Again it has taken the lie of the land and shaped itself around the hillside, put in proper roads and paths. At the moment there are a group of long term unemployed people who have to come and work the estate so they get their unemployment benefit. They are taking what is there and moulding it and shaping it, putting in more paths and are going to make a children’s playground. Again taking what is and changing and making something that fits where life is now.

As I walked I thought that at least the sea has been kept from all this but no! As you look out there are three different groupings of wind turbines standing sentinel in the sea. In 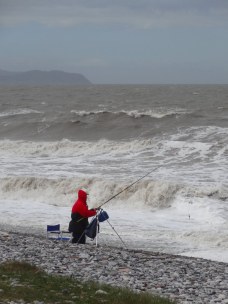 fact you can see the wind turbines from our bedroom window which is how we know we can see the sea! Again man has harness what is to make it his own. Though the wind does decide as and when it is going to make energy. Yesterday the wind was so strong, the tide so high that it was a wild and woolly day, but today the sun is out, the wind has dropped and the sea is hardly rippling. Even though mankind does take what is there is still some of nature that still has it’s own way.

So as I walk I am amazed at what we human beings have done to this land. There is very little there that would have been the same to the iron age hill dwellers who camp I can just see from my house too. Even back then they took what was there, the hill with its view of the sea and back across the land, and shaped and changed it into the circles of hills and ditches that would keep the families

So as I ponder global warming and all that I have great confidence that mankind will adapt and change, will somehow find a way through. I wonder what the fears of Iron-age man, Tudor man, Victorian man where? Yet each of them shaped and changed and alter what was to work for them. This is not to say that we should just carry on using energy and resources like we do. No we should definitely take responsibility, but I do think we should stop fearing and trust in our own ingenuity.