I know I journeyed through some stuff over the past 3-4 years, and it has

been a challenge, but I have thought I was getting stronger. What I didn’t realise, until I got it back, was how much my confidence had taken a battering. Mind you as I look at it I do wonder if I was ever a confident person. I put things on my blog because its easier than saying it to people. And at times I have been quite controversial!

How did I notice this? Well I started work in a local college as a learning support assistant, with a team that had been there for a long time who knew I was only going to be there until the end of the term, and I got taken seriously, what I had to say was valued, and not just that they expected me to input and give feedback. It made me realise that I had lost confidence not so much because of what had happened but by the way people reacted to me. So how did I notice that I had more confidence? Well I offered to read someone’s daughter’s psychology degree essay and when I’d done the mum said that it was nice to have it read by someone intelligent, and 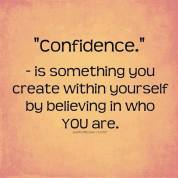 instead of saying some put down about myself I said yes I am. Also I was in a play at our church and the compare did, what I thought, was a poor introduction and so instead of just sitting back and thinking it I told him so, in a gentle way. And I didn’t blush or make it into a joke which I would have done before.

But you see the thing that has struck me is that I didn’t realise that I needed to have a confidence boost and the team I was working with were not doing what they did for me at all. They were just being them.

The thing that has struck me is how I have got something that I didn’t know I needed and got it from people just being themselves. So I want to

thank my team for being themselves. I want to say how pleased I am to feel an inner strength of confidence that I didn’t even though I needed. And I am also pleased that I didn’t know I needed it until I got it!

Wonder what things I’m going to get in 2016 that I didn’t know I needed. Interestingly I’ve been doing a piece with “Abbey of the Hearts” about asking for a Word for 2016 and what I got was:

Blank Page – Wait patiently for it to be written. DO NOT start to plan and fill it.

For me, with this realisation of regain confidence that I didn’t know I needed, this Word says that instead of thinking and planning and working it out I just need to sit and let God come with what He has and let Him fill it.

(Interestingly in this my fresh meat man Tony of Wiltshire County Fayre has asked if I will consider doing his newsletter once I’ve moved; which he will pay for. So already something is coming. But I need to be careful that I think don’t try to second guess that the other things might be.)