I thought I wasn’t creative. Why? Because I really am not great at painting – not the picture kind, though can do a wall very well, and in fact am good at choosing colour for interior designs – but anyway I’m not great at painting, really can’t draw, don’t see any fun in sewing, knitting, colouring in, felting, working with wood, etc, etc. All those things that go into “being creative.” And I was reminded of it again at an event we were at where the organiser talked about how they were into creative expression so they had some prophetic painters on stage and had wanted a dancer. Ok so I can’t dance or play an instrument either 🙂 At one point I felt a great urge to splurge all my thoughts on paper, write a bit of poem and prose, so I went to look for some paper. I was told by the most lovely man that any comments I had could go in the book they had for people to write in. That wasn’t what I wanted to do. I wanted to create with my words. They wouldn’t have liked my poem or random words scrawled across their lovely book, and it wouldn’t have been fair either. What I had to do was a bit like the artists were doing, putting random bits and pieces out on to a page until they became a coherent whole, a something that was coming from deep within.

I remember once, a large church meeting about 15-20 years ago, there were some prophetic painters there encouraging

the creative arts. We’d brought along some of our youth group and some musician and painter friends to help them get some encouragement. Well the guy comes up to me and goes “you’re creative.” and i look at him like he’s spoken in a foreign language. “You’re an artist” he tries again. Again I stare. I can see he’s trying to get through to me so I mumble “well I write a bit” and suddenly he’s talking to me, wanting to know what I write, how I write, what it does for me. Well there am I crying because no one has ever been interested in my writing before. It was an awesome moment. Though I have still struggled on and off over the years because I’m not a writer as I think writers should be. Oh my that comparing thing!!! Need to kill that one some time! Anyway I often see writers as those who are clever with words, those who publish books, or even those who are working towards publishing. But in fact that is stupid. I write all sorts of things, from lists to journal to these blog posts, to emails to friends, to the start of a story, and in fact many short stories and poems.

I am a writer and I am creative. Ok so we can all write and in fact I think we should all be writing more. Maybe that’s the thing – not many people can paint well or dance well or play an instrument well or sing well – but in fact most people can 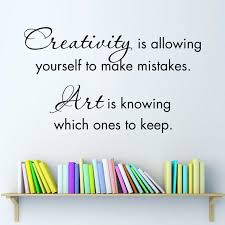 write and can write well, so it doesn’t get deemed as “being creative”, maybe? I have been reading and doing the exercises in Julia Cameron’s “Right to Write” and in that she says, and I agree with her, that too often we see writing as something that schools have taught and conditioned us to – how to write clearly and tidily so that teacher and mark our work and so we get scared by writing. I think its time to realise the word in all of us – mind you I also wonder if its time to release the painter in all of us too?