Today is Maundy Thursday, a day in church tradition when the heads of the church and

heads of state would give money to the poor. It was done in the most humiliating way, though I’m not sure if those doing the deliberately thought of it that way. They would throw the money into the crowd and the people would then throw themselves on the coins and fight for it. Remember these people were starving and had no welfare system. But to those doing the giving it reinforced the idea of “the poor” being uncouth and unruly.

Now the Queen hands out “maundy money” in a calm and dignified way to a chosen few.

Now we don’t even let those who could do with a bit of extra cash even go through the humiliation of having money thrown at them.  But I think that is because we hide the poor even more. It is harder to see who is on benefit and who isn’t, but the media makes sure it highlights those receiving state aid as undeserving, scroungers, uncouth and unruly!!

This week a might icon of history, religion, culture and tourism has fallen. There were 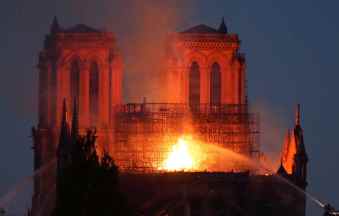 some very brave fire-fighters who worked hard to save it. People have been donating thousands for its rebuild. This same week, if you listen hard enough, the flooded areas of Africa are in dire need of food and medical supplies but no one is donating thousands for them. In fact many parts of Africa, Asia, Central and Southern America, and even parts of Europe are having an on-going struggle with severe poverty issues, yet money for these is raised in dribs and drabs. Is it better to be an icon than a person in need?